They will deliver lectures, discuss cataloguing techniques for Amazon artefacts.
They would also love to view any artefacts that locals might have hidden away in the back shed!
Starts at 10 am. Please bring your lunch. Tea & coffee will be available. Ends around 4pm. Free entry.
Please adhere to Covid protocols, Heritage Victoria request masks be worn.
It is significant to have these Specialists here for the day & a great opportunity for you to ask questions.
After recent huge rains, there is another section of Amazon wreckage visible in the eastern outlet of Wreck Creek (West of the Surf Club). 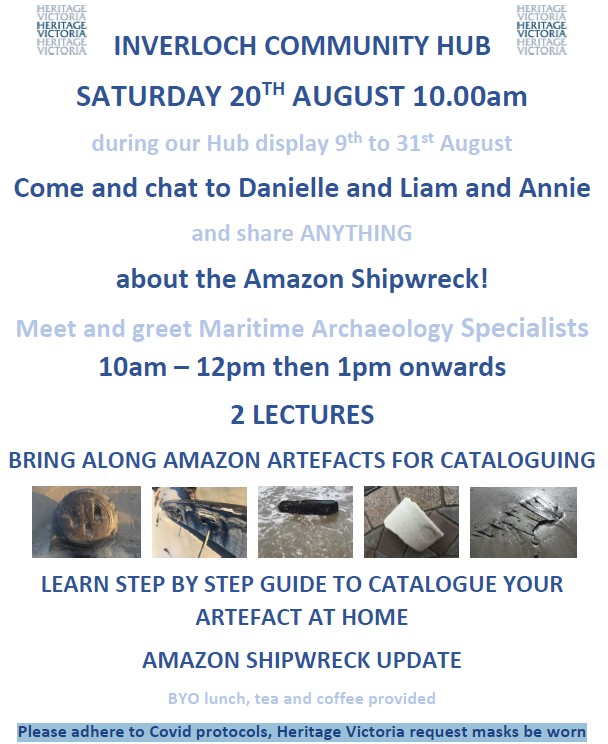 These sections were seen 2 years ago, but visibility is much better today.

Low tide is the only chance of viewing.

The photos show the eastern outlet of Wreck Creek & best visibility is from the Surf Club side only at low tide.

Even with long gumboots the creek is difficult to cross and the banks are over a metre high in parts.

As a scale reference, the erosion monitoring pole is about 3 m long and now over 2 metres out of the water.

One beautiful rib end, square and larger than a hand span, so about 8 inches. 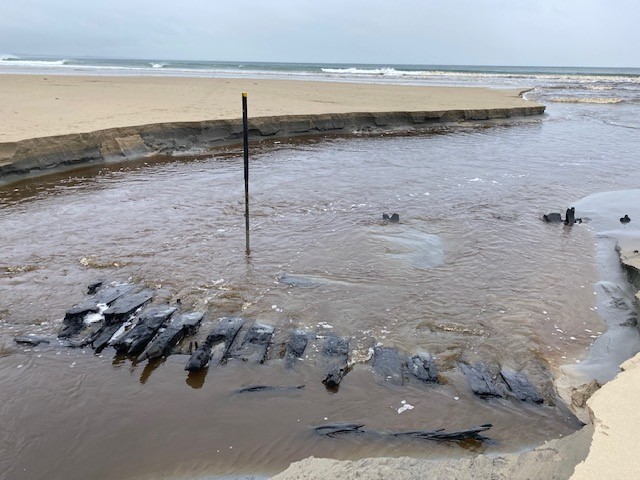 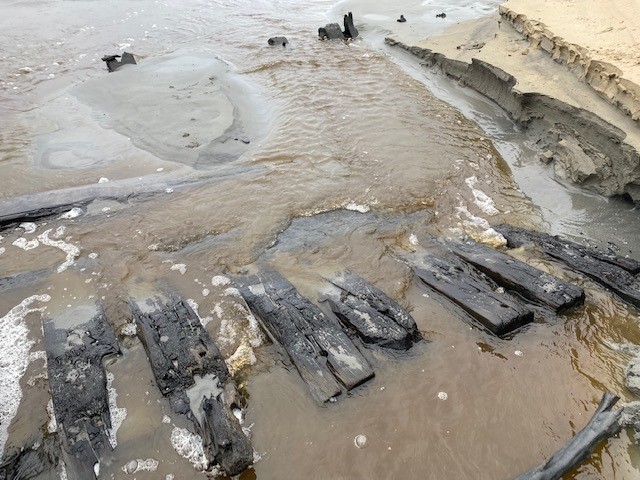 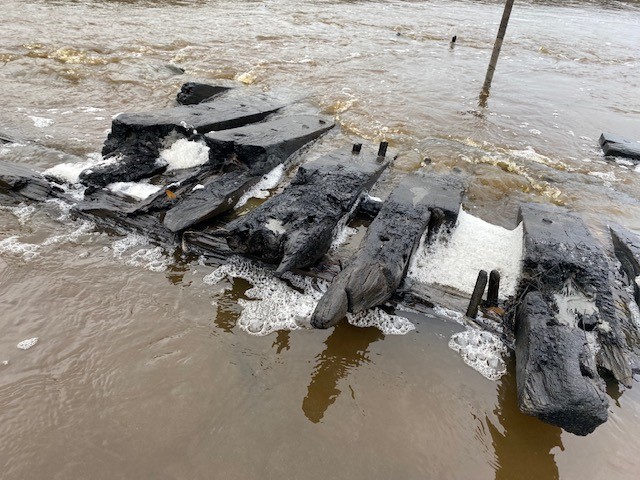 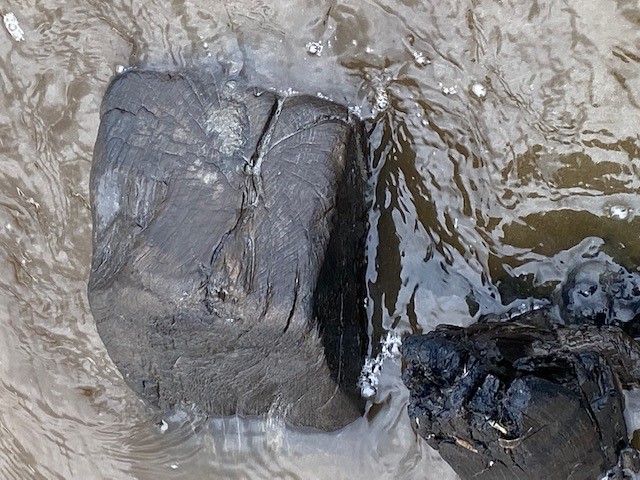 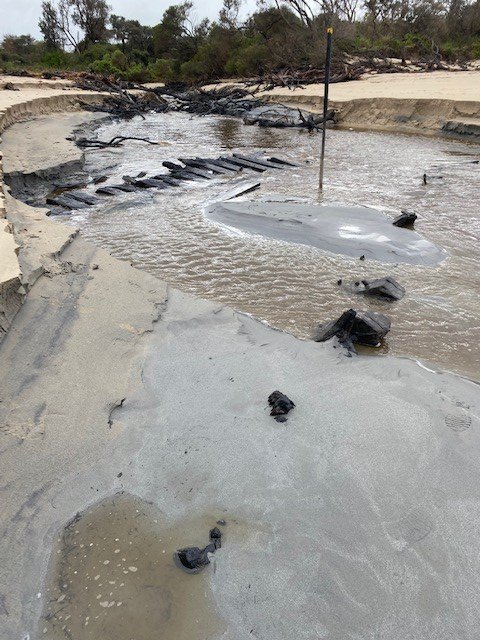 Unveiling of the Deadwood. Read more by clicking here… 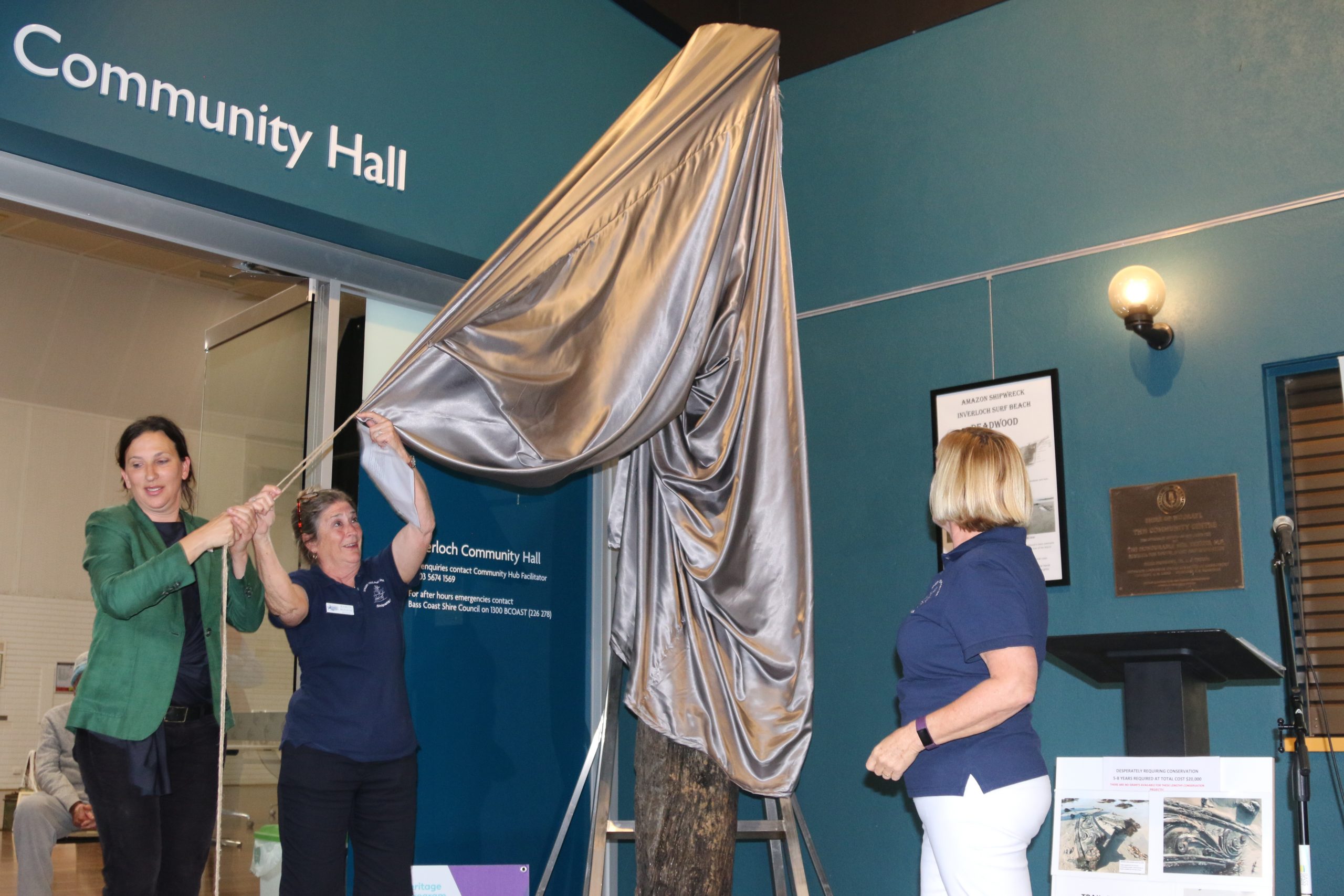 The remains of this protected historic shipwreck are buried near the lnverloch Surf Life Saving Club on the Bass Coast in South Gippsland, Australia.

The AMAZON was a barque of 362 tons built by at St Helier’s, Jersey by Fredrick Charles Clarke, Ship-builder. 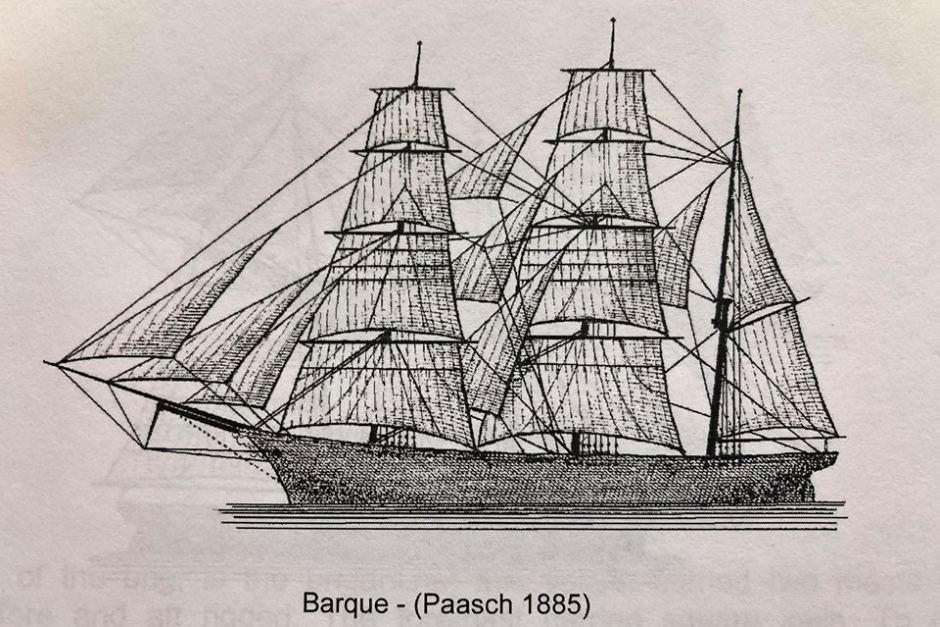 The Amazon was a Jersey-built three-masted barque, thought to be similar to the one pictured. (Source: Heritage Victoria)

The Melbourne Argus newspaper reported the loss of the Jersey-built barque AMAZON near Cape Paterson and the despatch of HMCS Victoria to rescue the crew in late December 1863.

According to the newspaper accounts, the barque left Melbourne on Dec 12 1863 bound for Mauritius with a cargo of salted meats. During the night a gale blew up from the south, the sails were reefed and the vessel hove to.

Despite all attempts the Amazon started to drift leeward towards the shore. On the morning of the 15 December 1863 the vessel came ashore on a sandy beach, close to some cliffs one mile south west of Andersons Inlet.

The fore and main masts were cut away to prevent the vessel from breaking up. The crew got ashore and set up camp.

The wreck was discovered eight days later by a Mr Heales on his way to Melbourne to spend Christmas with his family.

HMCS Victoria was despatched to rescue the crew.

The location was given as one mile south west of Andersons inlet and eight miles east of Cape Paterson, lying broadside to the beach and buried to a depth of nine feet in the sand. The water in the hull was level with the lower deck beams.

Preservation of significant Amazon artefacts, the site & written records. To Educate & share the history of this amazing ship.

Click here for more information about us & how to join.